Get the latest deals, events, fishing reports, and news.

Sailfish are typically found in waters relatively close to shore when compared to Marlin.  Though they are more commonly found at depths greater than 40 feet, in some popular sportfishing destinations such as Florida, sailfish are frequently found along very shallow reefs.  Pelagic and migratory, sailfish feed mostly on sardines, anchovies, mackerel and squid mid-water along the edges of reefs or current eddies. Sailfish prefer water temperatures in the range of 77 to 82 degrees F.

Sailfish are a pelagic big game fish and are migratory.  They tend to follow their favorite foods which primarily include ballyhoo, sardines, anchovies, squid and mackerel. Both Atlantic and Pacific sailfish live up to 16 years. Tagging data have shown that sailfish may travel as much as 200,000 miles in their lifetime.

Sailfish are famous for their beautiful, sweeping high first dorsal fin which they can unfurl to use in bait balling or “herding” bait fish. The sail is typically cobalt blue with black spots.  The bill is longer than the spearfish's and is more than two times the length of the elongated lower jaw. The sailfish sides sailfish range from grayish white to a bluish gray with vertical bars or rows of darker spots. 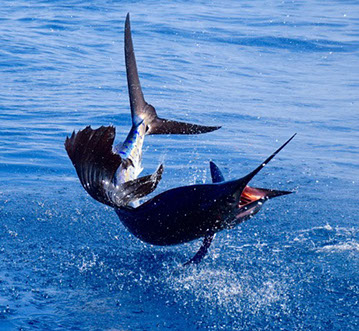 Guatemala is the undisputed sailfish capitol of the World. Costa Rica and Panama put up good numbers of Pacific sailfish releases but due to long-term long line fishing abuse and poor conservation in the past, their numbers do not come close to the spectacular sail fishing in Guatemala. Sport fishing operators in Guatemala specialize for the most part in targeting the acrobatic sport fish on light tackle in the 20-30 pound class and on the fly using 20 pound tippet.  Fly-fishing for sailfish using the bait and switch technique tends to become an addiction for anglers once they release their first sailfish on the fly.  One Guatemalan crew caught over 124 sails in a single day on conventional light tackle and another released 50 in a one day on fly.   Due to their proximity to shore an abundance of bait as close as 6 miles from Guatemala’s Marina Pez Vela’s docks, a big boat or a big budget is not necessary.  The most common boat fished in Guatemala is the famed 31 Bertram which is fast and maneuverable and provides much more cockpit space due to its special layout for sport fishing that many boats greater than 40 feet or more.

Speed and Acrobatics
Fastest bill fish in the ocean

Sailfish are famed for their spectacular colors and are the fastest big game fish in the sea.  They exhibit incredible line-stripping runs and put up memorable fights, especially on the fly or light tackle.

Sailfish exhibit remarkable acrobatics tail-walking across the water and making jump after jump as they do their best to find their freedom.  These attributes make them the perfect target for anglers seeking their first big game fish.   No other fish in the ocean is a better introduction to salt water sport fishing for junior anglers.

Guatemala’s fleet of sport fishing boats practice strict catch and release and exclusively use circle hooks when fishing with baits.  The advent of the use of circle hooks has resulted in better hookup and release ratios and more importantly a very high survival rate for sailfish.

There are several good deep sea fishing charters on Guatemala’s Pacific Coast in Iztapa Guatemala.  The 3 best are Pacific Fins, Casa Vieja Lodge, and Mad Marlin Lodge with Mad Marlin offering significant cost savings for the same or similar services.  These operations offer great boats and crews, spectacular food and all-inclusive package sport fishing vacations.  Mad Marlin also offers day charter options (fishing only) for the budget-conscious angler.  This option offers the same spectacular fishing as the all-inclusive packages while allowing clients to choose their own non-fishing components of their fishing trip such as meals and accommodations.  The all-inclusive fish and stay packages at all three of these fishing lodges are the most popular options and include airport pickup and return, fishing charter, accommodations and meals at the respective lodges.   Anglers looking for great fishing combined with a start-to-finish royal pampering experience choose one of the many packages.